It is always easy and rewarding to look back and reflect when you have done something challenging, particularly if you have been successful… I first mentioned the “Smiles per Mile” project in 2013 to my fellow members at the Rotary Club of Portobello. It was all along the lines of “I am going to do a long distance cycle to raise funds for End Polio Now”. But it was only until 2016 that the project had become a reality. The aim was for me to cycle 1200 miles in 12 days between Land’s End and John O’Groats to raise £10000 for End Polio Now whilst involving as many UK Rotary Clubs as possible. 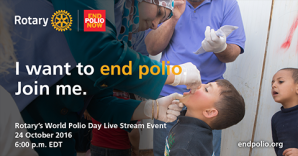 Logistics were complicated… Every time we got a club involved the route changed, and that was just the start. Then came the training. I have always been a cyclist but not one who had done something like this before. It was not easy. I have a busy job and a young family and sacrifices had to be made. It was a physical and mental challenge, with ups and downs as well as a few stitches under my chin (I fell down once during the winter period).

The months of training and preparation flew past and before I knew it, I was standing with my bicycle next to the famous distance marker/pole in Land’s End together with Rotarians from Penzance and St Ives, and also the President and Vice-President and members of my own club who went all the way down South to send me off…I really appreciated that! The training was challenging, but definitely worthwhile. I went through the Cornish hills relatively quickly. However, the British weather had it all in store for me. The first three days I was fully battered (and tanned) by an intense, bright and very hot sun. The effort through Cornwall and Devon wore on my legs… and the sun just made it so much tougher. As I was passing through the Cotswolds (4th day) I was about to give up. But one of the hidden heroes of this story, my wife would not let me throw in the towel. She made sure I kept going, not only then, but all the time.

As the days passed the body got used to the suffering but while the sun relaxed the winds woke up, just in time for the hills across the Lake District. There were many difficult times, but having Rotarians with me, or waiting for me, kept me going. Soon after that I was in Scotland where hills, rain, wind and cold came all together to welcome me. But there were only 4 days more, and they were very enjoyable.

The challenge was complete 13 days after it started because 1 extra day was set aside as a rest day. Funds raised were not near where we wanted them to be (we only had around £6000 when the cycling finished). So the work continued, and this where the Rotary Club of Portobello really stepped up to the plate. Our members got involved in many activities, bucket collections, car boot sales and even organising a concert still to be held. I have also continued to fundraise by giving talks about the project at various clubs myself. We have not stopped. But we are at an excellent point. Today is World Polio Day and we can say that we have made it. A few days ago we managed to complete our £10000 of funds raised to End Polio Now and we thought that there was not better day to announce it than today. We hope that you join us in this celebration that only reminds us that despite all the effort we still need to keep working to End Polio Now. Unfortunately we are not there yet…